This 38-mile loop served as our inaugural hike into Montana’s Cabinet Wilderness Area. Magnificent views, picturesque alpine lakes, plenty of wildlife, and some of the best ridge hiking you can dream of all packed into a day of fun!

Immediately, trail #898 starts to climb the western side of Twenty Peak, using an old twin track that switchbacks up the hill. At first the trail is fairly open and quickly presents great views into the Clark Fork River Valley, but the heat can be oppressive. Luckily, the shrubbery (sarvisberry, ocean spray, elder, et al) yields to a fir and lodgepole forest as you go higher (we saw a few whitetail deer there). When you’re near the top of Twenty Peak, the trail flattens and contours along the mountain towards Twenty Odd Peak, with the forest retreating and presenting incredible views of Belgian Gulch, the Idaho mountains, and the Clark Fork River Valley almost as far as Lake Pend Oreille. The remnants of the lookout tower on Twenty Odd Peak are reached shortly past the 5-mile mark. Views are superb, there’s even an excellent cell phone signal, and a patch of snow (in early July) to roll in if you are so inclined (Naughty was). The nearly 4000-foot elevation gain to the old lookout tower makes up the majority of the climb on this hike.
​

At the old tower, trail #903 commences and heads north atop the ridge towards Twenty Peak. The drop-off to the east is mostly open meadows with good views, and the tree-cover to the west is fairly open, so you’ll be able to view the Clark Fork Valley, too. The trail bypasses Twenty Peak, and drops through a dense spruce thicket to the saddle below and then rides the Canyon ridge eastwards, moving up and down and up and down. Both sides of the ridge are pretty much hemmed in by young spruce trees, so views are limited until you start to climb towards Canyon Peak. Naughty reports that this stretch has the highest density of grouse anywhere (take that with a grain of salt; Naughty never stepped foot outside Washington/Idaho/Montana). Keep going straight on trail #903 where it meets up with trail #892 heading down the West Fork Canyon Creek (it is signed). In the overgrown meadows below Canyon Peak, the trail is easily lost (we lost it), but flying by GPS you’ll be back on track in no time (the trail follows the old USGS hiking maps very closely throughout this hike). The path actually bypasses Canyon Peak and moves to a saddle just north of it at the 9-mile mark after intersecting with trail #360 (head left–north).
​

Then starts the highlight of this hike, a ridge hike view grandiose views. Ahead, to your right, is Silver Butte Mountain, but the trail sticks to the ridge on the left and bypasses trail #298 (signed) dropping down into the Silver Butte drainage. The terrain is grassy and open and rocky with few, or only stunted, trees blocking the views. It’s quite easy to lose the trail as it shift to this or that side of the ridge every so often but always moves back to the ridgetop, as if attracted by a magnet. Near the 11-mile mark, the trail leaves the ridge which climbs to an unnamed peak and moves along the western side of it to meet up with the powerline road near the 13-mile mark. Turn right onto that dirtroad, which is open to vehicular traffic, and take it back up to the ridge. There, pass beneath the powerlines and continue on an old twintrack that skirts a rise just ahead of Baree Lake. In the saddle on the other side is the first opportunity to replenish water by dropping a half mile into the picturesque bowl holding Baree Lake. The lake comes with a pretty campsite, occupied at the time we visited, plenty of water and even a couple of snow patches in the shade areas (the lake is at the 15-mile mark; the next source of water is Buck Lake at the 24-mile mark).
​

Back up on the divide, the trail closely follows the ridgetop for another 2 or 3 miles, providing excellent views into the Swamp Creek drainage to the left and the Bear Lakes area to the right. The Bear Lakes themselves, though, remain hidden. Shortly past the signed fork to the Bear Lakes (“bear” left), trail #360 shifts to the Swamp Creek side and contours alongside the mountain. The views of Buck Lake, looking rather forlorn in a green meadow below huge Wanless Lake that appears to be suspended high up below Engle Peak. The trail crosses a few talus slopes and passes impressive rock formations. Shortly before the gap below Carney Peak (ie, Buck Pass, which leads to the Geiger lakes), there is a fork on an extensive talus slope at the 20-mile mark. The Swamp Creek trail heads left, downhill, while the right leads up to Buck Pass. The downhill route declines sharply over the next four miles, but this is accomplished via a series of switchbacks, with the length in between nearly a mile long!
​

At the bottom you approach Swamp Creek. There are few trees, but the grasses and flowers and shrubbery are high and thick and obscure the trail. Near the creek, take whatever remnants of trail you can find and climb uphill for perhaps half a mile to find the object of this hike in a pretty meadow. It’s relatively shallow, at least compared to the huge Wanless Lake that feeds it from up high, but suitable for a dip nonetheless. The water is cold and refreshing!

Seeing on the map the trail ultimately follows the opposite, western shore of Swamp Creek, we decided to use a few boulders in the lake to accomplish the crossing with dry feet. This turned into a colossal mistake. On the far side we found a dry creek bed, which was easy to follow, but shortly merged into Swamp Creek. Thus we scrambled up a steep wooded hillside and bushwhacked in difficult terrain down to the place where we should have crossed. A giant boulder field cleared the vision, but was tedious to traverse, and on the other side more of the mountain ash, alder, and elder shrubbery awaited us, no doubt harboring bears and moose and other unsavoury characters. None made themselves known, but ticks showered us en masse. After a rather tedious mile, an extensive meadow provided relief, and then we found the proper crossing. As it turned out, that crossing may have caused wet feet, but the flow was light and the detour not warranted. Stay on the trail!

For the next 7 or 8 miles, the trail leads along Swamp Creek, staying high above it at first, but later moving right alongside. There are a few tributaries to cross, each an easy rock-hop. Once you leave the wilderness, and the creek swells, you may spot beaver lodges in the river below as you cross one of numerous talus slopes sliding down from Goat Ridge. Just when you think you’ve seen all the talus in the world there is one more. At the Swamp Creek trailhead, you’ll find 2 informative placards detailing the events of the 1910 “Blowup” that cost four lives in the Swamp Creek drainage. Most firemen survived by climbing or digging into the talus slopes on Goat Ridge, but those trying to outrun the flames perished.
​

From the Swamp Creek trailhead it’s about six miles back to the car, mostly on gravel roads. Obviously, this is easiest accomplished by means of a shuttle, which did not have. Neither did we have the foresight of hiding a bike in the woods, thus it was a two-hour hike by the light of the headlamp, because daylight left nearly complete while still on the Swamp Creek trail. Unless you camp at the trailhead (we drove and arrived at the trailhead at 8.30 am, having lost an hour as Montana is on Mountain time) or run partway, you, too, will finish by candlelight. We arrived at the car on the stroke of midnight. But it was all so worth it!
​ 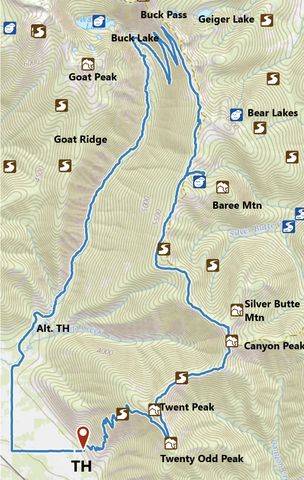