Heavily logged in the early twentieth century, the Marble Creek region is now blanketed with a mix of fir, larch, cedar, spruce, and hemlock, with little evidence of the coveted giant white pine stands that once covered the hillsides. The route commences at Gold Center Creek, which drains into the Clearwater system, then crosses the divide and drops beneath Grandmother Mountain to Marble Creek, which empties into the St. Joe. The way back moves past a splash dam and remnants of a bygone logging camp.

From the parking lot on Gold Center Creek, the trail ascends the hillside at a gradual incline and parallels the creek for perhaps half a mile through cedar forest carpeted richly with spring flowers and fern. The north fork of the creek is then forded, which is easily accomplished by means of two fallen logs. The trail then ascends in earnest, riding the southwestern flank of Grandmother Mountain pretty much straight up. That means nearly 3,000 feet of elevation gain over the first 3 miles. The forest is doted here and there with bright-green fern-and-coneflower oases, but in many places is dark and foreboding, its eerie silence interrupted only by the somber staccato of a woodpecker. The second half of the ascent is flatter as the trail departs from the ridge and moves along the face of Grandmother, crossing 3 streams. The forest also retreats a bit and enables views of Mark’s Butte, Windy Peak, and out towards Clarkia.

Shortly after the 5-mile mark, the trail forks, with the right leading to Freezeout Saddle, an alternative trailhead. Swing a left and gradually ascend trail #275 towards Grandmother Mountain. After less than a mile the trail forks again, with the left heading up to Grandmother and the right alongside the mountain. Drop down to the right, crossing a bridge and re-enter the forest. Large patches of snow remained here, but the trail was still easy to make out. Soon the forest opens up, the trail turns into a minor snowmelt-fed brook and a lovely alpine meadow spreads out below Grandmother’s peak. It ought to have been teeming with elk and deer, but none were about, though Naughty reports that the place was teeming with rodents of all kinds.

The trail then moves alongside the mountain with frequent views opening towards Lookout and Widow Mountain and also Mark’s Butte and Crater Peak. In denser woods, we encountered another patch of snow, this one much more extensive, and promptly we lost our way, the trail being buried beneath 4 feet of hard-packed snow. We kept going in the same direction and eventually zeroed in on what looked like a small meadow in the distance. Just ahead of the meadow was a campsite, but no signs of a trail (the campsite is at the 7-mile mark). We crossed the meadow and stumbled upon the Cornwall Point trail, which we followed downhill for a bit to the fork with #251. Back on track, and the snow mostly behind us, we continued on #251, which tracks the ridge and offers views to both sides. This section made for exceedingly pleasant alpine hiking, with views, a slight breeze, pretty meadows, cheerful birds (gone is the somber woodpecker), dark-green fir and spruce, and huckleberries (the latter in a month or so). At the 9-mile mark the trail splits, with trail #261 heading downhill to the right and #251 continuing straight.

Going downhill rather steeply, you’ll shortly come upon a campsite with a view to die for and a stack of split firewood. Then the forest swallows you once again and the views are gone, replaced with lush ferns and a magnitude of wildflowers. Naughty spotted a couple of elk in this section and impressed them with a display of speed, agility, and size. The latter likely didn’t impress them much, but nonetheless they gracefully sauntered off into the underbrush.

Near the 12-mile mark the trail arrives at Marble Creek where you’ll find a campsite, a wet fording, and, if you’d arrived 100 years ago, a splash dam and a logging camp. We couldn’t find any remains thereof, though. Anyway, with snowmelt still ongoing, the current was very brisk and the deepest spot nearly mid-thigh deep. On the far side, the trail ascends the hill, then forks, with the right heading up to Orphan Point (Delaney Creek trail #273). Instead, swing a left and plow through the dense alder that pushes relentlessly into the path from both side.

For the next 6 miles the trail contours along the hillside, crossing at least four tributaries that required fordings (these are likely rock-hops later in the year). The forest is pretty and changing, at one time dense and overgrown and at others open and park-like. You’ll come across many of the giant tree stumps that were logged in the early 20th century, now moss-overgrown and decaying. The white pines that this region was known for appears to have disappeared. Instead, there is fir and larch and several nice cedar groves, with some giant remains of truly old trees. Almost immediately after crossing Duplex Creek, a spur trail ascends to the right to another campsite apparently used extensively by horsemen.

The last creek crossing in this section is Homestead Creek. It is also the deepest. A log, albeit a bit scrawny, conveniently crossed the creek, but needed to be accessed from within the creek. Naughty, lifted onto the log, made a few tentative steps towards the middle of the creek, then panicked, turned around, and raced back. Hence, we forded it the old-fashioned way, with the water torrid about knee-deep. Afterwards, the trail ascends quite steeply, which is somewhat frustrating, since the map shows that you ought to be going down.

Ahead of the 18-mile mark, the trail forks (take a left) and as you get really close to the 18-mile mark, at the end of a long meadow, it forks again. Continuing to contour along the mountain and staying on trail #261 leads to FR-321 (an alternative trailhead) in 3 miles, #251 heads north (uphill) heads to FR-216 (also an alternative trailhead), and our trail was #251 south (downhill). The trail drops and reaches the Marble Creek in about half a mile. It then moves upstream, close to shore, to the site of an old splash dam, and a bit past that another stream crossing. Given the snowmelt, this proved to be trickier, with the deepest part hip-deep and the current strong. Luckily, the creek is quite wide at the point of fording, but Naughty had to be held tightly since her swimming prowess was no match for the current.

On the far side, we refilled our water bottles, had a snack, and with the sun already having a hard time probing the canyon bottoms, got cold quick. It was time to move on and tackle the second steep ascent in this hike, another 3,000 feet over the next 3 miles, through dense woods with few views. First, you have to ford Cornwall Creek, which is easy compared to Marble Creek. The trail then climbs sharply and leads through an old logging camp, whose only reminders are a rusting woodstove, lots of iron framing, a few metal buckets, and moss-covered tree stumps. During the ascent, the trail crosses 2 logging roads, each of which is merely crossed.

Following the steep climb, the trail flattens and pleasantly moves along a ridge and spills out onto an old logging road. The continuation of the trail is signed at the end of that road to the left. In fact, the trail merely uses that old track to move uphill once again. Eventually it levels out and deposits you at the fork with trail #261 at the 23-mile mark. Then it’s another 9 miles along the same trail traversed in the beginning. 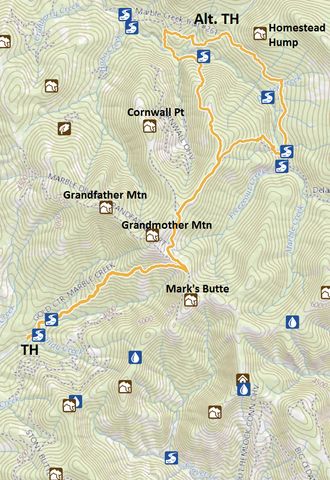