The Crystal Lake loop in the St. Joe Mountains is rather pretty and surprisingly popular given the rather tediously long drive up Rochat Divide. The trout-filled lake, gorgeous camp spots, and huckleberry-carpeted hillsides make it certainly a worthwhile endeavour, topped off with sweeping views from Pearson Peak across the Coeur d’Alene Mountains and the Palouse.
​

The trail starts on the northeast side of FR-613, dropping slightly and contouring along the northeastern flank of Pearson Peak. At first the trail is rather open with good views to the mouth of Latour Creek and the surrounding mountains, including Latour Peak, then its gets rockier, crossing a few talus slopes, and finally fir takes over on approach to the lake. It’s about 1.5 miles to the lake. There are a few choice campsites right where the trail meets the lake, but perhaps the best one is on the far side, where a minute peninsula slides into the lake beneath the steep forested nose of Reeds Baldy. The easier way to it is around the western end of the lake, which features a decent angler trail. It’s possible to circumvent the lake (about 3/4 mile), but the eastern end is steep and brushy.
​

Either head back the way you came, or, to get a bird’s eye view of the lake, steeply climb the headwall of the lake towards a saddle between Pearson Peak and Reeds Baldy. At the saddle you can either continue on the trail, which shortly meets up with FR-613, where you head north back to the car, or, for better views, hike off-trail up the rocky ridge towards Pearson Peak. After scaling the first knob, peek over the edge to the east at the lake as you won’t be able to see it anymore later. The route then follows animal tracks, sticking close to the spine of the ridge as it climbs higher up treeless Pearson Peak. The views here are phenomenal, starting with antenna-studded St. Joe Baldy, beyond it the Clearwater Mountains to the south, then the St. Joe River Valley and Palouse to the west, and the Coeur d’Alene Mountains to the north. There is a rock cairn at the top of Pearson Peak, and afterwards it’s downhill towards Rochat Peak, crossing plenty of shifting talus. Shortly before returning to the trailhead, alpine fir blocks the way and the animal tracks get a bit confusing. It might take some brute force…
​
Enjoy this hike? Let us know in the comments below! 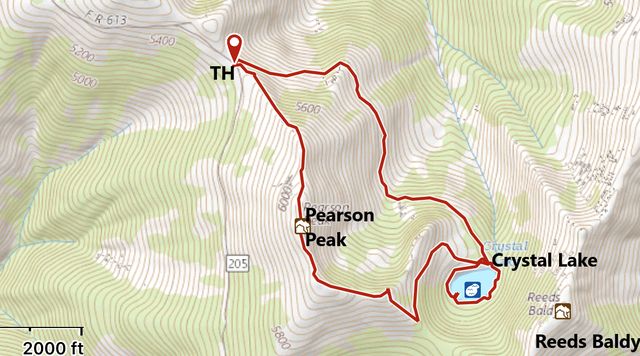