McLellan is a 410-acre pine-covered property tucked into an elbow formed by the Spokane River. The slow and wide river is actually called Lake Spokane and abuts the conservation area on three sides. The four-to-five mile loop moves along a bluff overlooking the river, skirts a decaying log cabin, winds through thick stands of pine saplings, and includes a comparatively open spot on the river’s edge. The local white-tailed deer population is almost as dense as the pine saplings.

To turn this hike into a complete loop, head west at first, but this is the road less traveled and the trail may be hard to find. Instead, head east for just a short distance along the fence until you get to a gate leading to the DNR parcel stretching out to the south. Ignore the gate and head north instead on an old logging road that is very easy to follow. About a half-mile into the hike that road forks with the left plunging steeply downhill to a quaint and open spot near the river’s edge. This is perhaps the nicest area of this entire hike, and the trail continues westwards but eventually peters out and you’ll have to climb the bluff to get back to the car (we did this little loop after finishing the main loop; beware the climb is fairly steep). To stay on the main loop, follow the other fork, with the trail heading eastwards, hugging the bluff’s edge. The views of the river are heavily filtered, but it’s a nice walk through the woods nonetheless.

At the one-mile mark the trail drops to a lower tier of the bluff and the remains of a log cabin. Shortly past the cabin is another opportunity to head down to the water, but the shore here isn’t as wide and spacious as in the earlier location. The trail then gets a bit harder to follow, but essentially follows the edge of the bluff eastbound to the elbow, then heads south. It’s mostly a game trail there, but you can just continue along the edge of the bluff until you pick up the traces of an old twin track that leads away from the river. This southeastern corner of the parcel is thickly overgrown with pine saplings, but the old twin track will lead through the thicket like a tunnel. Soon after you’ll hit on the barbed wire fence and a second gate marking the southern perimeter of the conservation area. The trail then parallels the fence, except for one short stretch halfway up, where it veers away violently only to return again immediately. 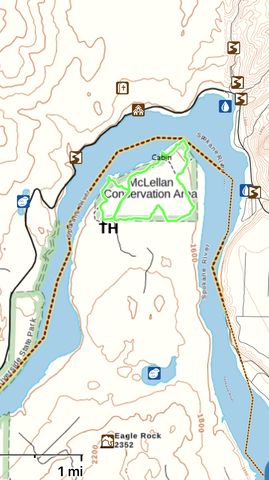